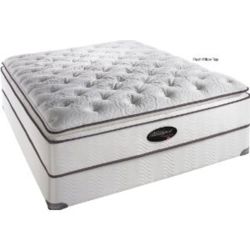 Simmons have a long line of Beautyrest mattresses.  The Anniversary is a somewhat middle-of-the-road Beautyrest with a higher coil density and more foam layers than the Classic but less so than the World Class.  Like all Beautyrests it is available in several different sizes and also in a number of different comfort options. [REF Simmons Mattress Reviews]

The Beautyrest line of mattresses have been manufactured by Simmons for the past 85 years and has grown to include a multitude of models.  At this time the Beautyrest series of mattresses include (this list does change time to time as older mattresses are dropped and new ones are introduced):

We have looked at most of these in previous reviews and in this article we look at the Simmons Beautyrest Anniversary.  One of the main things that set the different models apart is the coil count or coil density as it is often called.  This is typically measured as the total number of coils in a queen size version of the particular mattress.  The coil density of the Anniversary is 850.  By comparison the Classic is 800 and the Word Class 1000.  The Anniversary, like all Beautyrest mattresses, uses pocketed coil springs.  These are coils (or springs) that are individually encased in a pocket of non-allergenic fabric.   This approach, according to Simmons, provides for better motion separation (limits motion transfer across the mattress) and also aids in comfort and support.  The coils on the Anniversary are made of high-carbon steel.

The Anniversary can be purchased in several different sizes:

It is also available in a number of different comfort levels.  These include Firm, Luxury Firm, Plush, Plush/Firm and Pillow Top.  Firmer mattresses uses thicker wire gauge coils while less firm mattresses use thinner wire gauge coils and additional layers of foam.  Additionally it should be noted that box springs can be bought to accompany the Anniversary and these are available in both standard height (9 inches) and low profile (18 inches).

The Anniversary is a no-flip mattress (never needs to be flipped or rotated) and it carries a 10-year warranty against manufacturers defects.

Following is a video on the Simmons Beautyrest Anniversary mattress.  It is fairly long (about 20 minutes) and it is indeed a bit of a hard-sell commercial (by HSN), but it is a good way to see the mattress and learn more about some of the features.